Tomato Sauce with Onion and Butter

Before we start this week's blog I have a bit of an announcement. This will be the last "regularly scheduled post" you are going to see until January. I have decided to apply for grad school, and am currently knee deep in application hell. Pile on top of that an insane November full of family visits both in NY and PA, and a number of other events I'm involved with. (One of these things is the Queens Eats fundraiser for the Queens Harvest Co-op. If you live in Queens and would really like there to be a food co-op, you should attend! Tickets start at $30 and can be purchased here) In the past I have taken on the attitude of "I can do everything! It will be fine! I never liked sleep that much anyway!" This inevitably ends in a downward spiral where I work myself until I fall ill, end up half assing at least one of the things on my list and resenting the hell out of everything else. Then I have a sobbing fit which when you compound that with the cold I've contracted by that point in the spiral, makes me a very pretty girl indeed. Planning, cooking, and writing about an elaborate meal once a week is probably the task that needs to go right now, otherwise that will become the half assed project which means bad writing and probably a small kitchen fire.

This doesn't mean there will be no blogs, I'm just not going to hold myself to a schedule. Updates will be announced on Twitter and you can see them right away if you subscribe to my RSS feeds (see links on the right). I'm working on a project to make french sourdough bread, and I think we're still having our Christmas party so there should be interesting, if sporadic, posts. This blog has meant a lot to me over the last year and a half and I look forward to having more time to devote to it in 2011!
With November being the scheduling nightmare that it is, we've been hitting the take out menus pretty hard lately. Knowing what the rest of my month looks like, I've been desperate for some easy dinner ideas. I don't mean "15 Minute Meal" type ideas, I mean open, pour in bowl, hit Reheat kind of ideas. I don't want to shop, chop, or do any unnecessary dishes. This all reminded me of a story I heard when I was 16 about Broadway playwright Jonathan Larson. While writing Rent he wanted to be able to focus all his energy on his art, and not spend any time on other activities. Sunday nights he would cook a huge pot of pasta and live off of it all week. This stuck in my brain as part of the Bohemian artistic lifestyle I would someday live in NY. I also thought I would wear a lot more leather pants. Go figure. I do love a big pot of pasta though and as I have dealt with the reality of the next few weeks, I knew that was a good option, especially since most sauces freeze wonderfully. I turned to a sauce that has always been a favorite of food blogs. A sauce so simple I would recommend it to new moms, not for before they have the baby, but for making when all of those casseroles run out. It requires all of 4 ingredients, and a stove. That's pretty much it, and it makes a sauce so incredible I was using sandwich bread to sop every last bit out of my bowl.

One of these very simple ingredients is a can of tomatoes. I was ecstatic. Why would I get so jazzed about an ingredient that I didn't select from my local farmers market? Because for the last year I have had a 6 pound can of diced tomatoes sitting on my shelf. Will brought it home from his restaurant, they were changing brands or something, but he lugged it home for me. Six pounds of organic tomatoes, just waiting for someone's imagination to turn them into something wonderful. I didn't have that much imagination. It was so much tomato! There were two of us! For awhile I contemplated a really cheesy spaghetti dinner party, with checked tablecloths and those bottles of wine with the wicker bottoms. It never came together though, and there sat my can of tomatoes, taking up space being all accusatory. 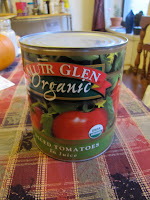 Ingredients:
- 6 pounds canned tomatoes (whole or diced)
- 2 sticks of butter
- 2 medium onions, peeled and cut in half
- Salt to taste
- Freshly grated parmigiana for the table

Directions:
If using a gas stove, you can char the bottom of the onions by placing them directly on the burners, until they get just slightly blackened. This will give your sauce a richer taste. Put the tomatoes, butter and onion in a large 5-quart pot over medium heat. When the sauce begins to boil turn down heat. Simmer until fat floats free from the tomatoes, between an hour to an hour fifteen. Stir from time to time, mashing the tomato against the side of the pan with the back of a spoon periodically. Taste and add salt if needed. Many canned tomatoes come pre-salted so use your judgment here. Discard the onion. Toss as much sauce as desired with cooked pasta, put the rest in freezer bags for later! 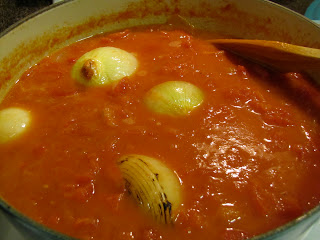 While this recipe calls for canned whole tomatoes, the diced worked fine. They didn't quite fall apart the way I would have liked them to, but a quick pulse with the immersion blender

gave the sause the thick puree I desired. If I wanted it more rustic, I would have skipped the blender.

It was a very good sauce. When I came home exhausted the next night and asked Will if he would mind us eating it two nights in a row. He practically skipped to the fridge. Last night when he finally got home from work at 10pm, he started eyeing the freezer bags. I don't know how long my reserves will last! Better get another 6 pound can of tomatoes...
Posted by Heather at 8:50 AM

best of luck with your new path! Applications can get you down, so I see why you made this sauce. It's awesome, easy comfort food. Theresa 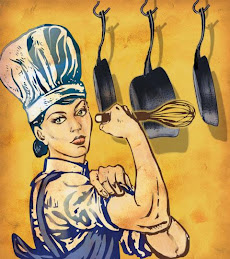 Image by Jesse Philips featured in Time Out New York 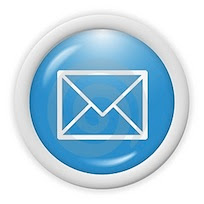